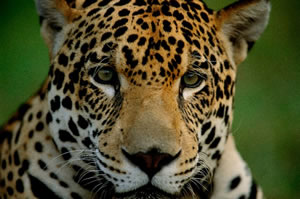 Following the tracks of the jaguar, the “king” of the Misiones Jungle which locals insist on calling the tiger, it’s not easy. According to studies by researchers from CONICET, the province of Misiones, only has about 50 adult specimens.

The conservation of the forest is a matter of life or death for the jaguars that due to its strong territorial character and large size, need large spots of unspoiled nature to feed and reproduce; fragmentation and deterioration suffered by the ecosystem it inhabits, is one of the main causes that puts this species on the verge of extinction.

As a result of the disappearance of large areas of unspoiled nature, the meeting of this elusive feline in the dense forest is increasingly bizarre, we can say that it is almost impossible today to find these animals and those who have; life has given them a priceless gift.

In Misiones they only find “refuge” in the Iguassu National Park and the Urugua-í Provincial Park in the north, to the valleys of Cuñá Pirú and Yabotí Biosphere Reserve in the center of the province. Thus, the few regions that conserve the forest in good condition become true natural sanctuaries.

This big cat worshiped by the pre-Columbian American cultures, paradoxically suffered constant “stalking” of man over the last two centuries of American history. From its original territory, this extended from the southwestern United States to the edge of Black River in Patagonia. Nowadays there are only scattered patches of forest from Mexico to the north of our country!

Cornered in the “Yungas” of Salta and Jujuy, a portion of Chaco and Misiones jungle, the original population of jaguars in Argentina decreased by over 85%, and it is estimated that currently, only about 200 individuals find refuge in these forested areas in the north.

There are several reasons why it is on the verge of extinction. In the early nineteenth century, it was hunted indiscriminately for its skin- very international – listed on the market, and it is estimated that at that time, more than 2,000 skins of jaguars were out per year, from the port of Buenos Aires to Europe.

Today, the greatest threat to this animal is the rapid destruction, degradation and fragmentation of habitat. The Misiones forest has less than 20% of its original area. The rest suffer continued deforestation, agricultural-livestock farming, the installation of large hydroelectric dams and the extension of roads, reducing increasingly extensive natural areas carried the cat to find the support needed to feed, procreate and and perpetuate their species.

This reduction and “fragmentation” of their original habitat, on one hand, makes only some small “communities” of jaguars that live far apart from each other without connecting paths between the different territorial areas, and therefore interbreeding individuals of the same “family”, which causes inbreeding, ie the genetic erosion of their populations.

The fragmentation of the forest, also affects the food chain of these animals, finding no natural preys that form their diet, they seek other options. Then attack domestic animals from nearby farms to parks and nature reserves; and becomes a feared opponent for small farmers – in many cases, very poor and with low education -which in the presence of a feline don’t hesitate to pull the trigger.

Meanwhile, it was declared a National and Provincial monument in Missions in 1988 and a National Natural Landmark in Argentina in 2001, the fact is that there are fewer jaguars as time goes by, this is because beyond the law, in practice there is no effective plan to protect the species and end the killing and destruction of their habitat.

Being the largest cat in America, jaguars are exemplary measuring about two meters long and easily exceed 100 kilos. His strong territoriality makes an adult male need over 200 km2; and in this space it tolerates only the presence of two or three females, but no other males.

To live it prefers forest environments in good condition, especially near rivers and swamps. His great skill as a swimmer and tireless walker is another feature that makes it require extensive forest areas.

Undoubtedly, the deterioration of nature by the hand of man triggers a series of factors that dramatically accelerate the decline of their populations.

Thus, the most important predator of the jungle retreats; quietly and secretly. So finding it is not easy, and surviving examples are resigned to survive in these small portions of forest where it finds “shelter”; mysterious and lonely, leaving only the picture of his tracks.